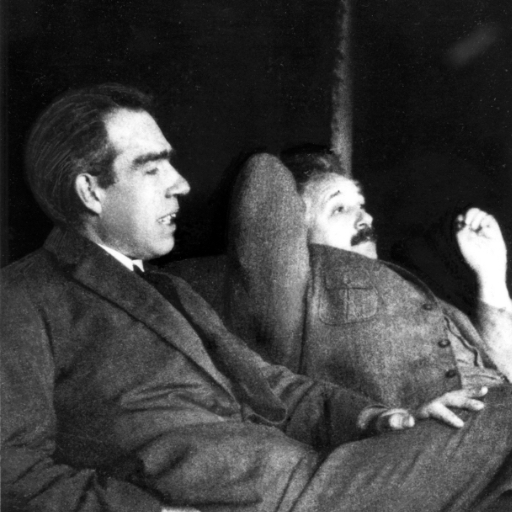 Niels Bohr’s ideas surrounding atomic structure, proposed In the early 20th century, laid the foundation for huge swathes of modern science. He spearheaded the movement for the radical (at the time) idea that an electron orbiting the nucleus of an atom, as proposed in the model of Ernest Rutherford, was only able to exist with certain ‘allowed’ energy levels. On this topic, In 1913, Bohr produced what is now referred to as a ‘trilogy’ of papers which pull together a few of the most important concepts which had been proposed in the decade prior, and split back out again into some of the broadest fields of modern science.

The map I produced below from Bohr’s first 1913 paper — {{"replaceWith":"span","articleId":2974201815,"content":"On the constitution of atoms and molecules","action":"inspect","windowId":"main"}} — gives us an immediate visualisation of this idea. On the left of the map, there are some of the most seminal papers of the time; {{"replaceWith":"span","articleId":1574798849,"content":"Rutherford’s","action":"inspect","windowId":"main"}} proposition of the nucleus based atomic model, and {{"replaceWith":"span","articleId":2005886497,"content":"Einstein’s paper","action":"inspect","windowId":"main"}} on the photoelectric effect, both of which resulted in Nobels of their own, connecting to Bohr’s paper. On the right hand side we see citing papers on the development of the periodic table, quantum mechanics, nuclear physics and x-ray spectroscopy. All of these disciplines owe a debt to the insight of Bohr.

But how do these papers fit together, and why?

{{"replaceWith":"callout","description":"You can keep reading the summary I’ve written below or, if you’re feeling adventurous, use our map to find out how deep the rabbit-hole goes: find new papers, explore old ones, and complete your own picture of how everything is connected. I’ve annotated some notes on the key papers in the map to get you started.","button":"View Map","buttonLink":"https://app.litmaps.com/shared/map/770DB806-2C8B-4506-96D9-D3C272ED3A47?utm_source=litmaps&utm_campaign=bohr&utm_content=cta"}}

{{"replaceWith":"span","articleId":2974201815,"content":"Bohr’s paper","action":"inspect","windowId":"main","href":"#frame-main"}} extends the concepts of quantisation which were actually first put forward by Max Planck and Albert Einstein. {{"replaceWith":"span","articleId":2281205388,"content":"Planck in 1901","action":"inspect","windowId":"main","href":"#frame-main"}} published a paper in which he had empirically found a relationship between the frequency of energy radiated by a black-body (a hypothetical perfect absorber and radiator of energy, with no reflecting power) which implied that this radiation had energies separated in discrete steps. Planck himself was reluctant to embrace this idea, pointing towards some complex resonance effects to try avoid a departure from the classical idea of a continuous energy spectrum. It was not until the idea of the photon (an indivisible particle of light) was proposed by {{"replaceWith":"span","articleId":2005886497,"content":"Einstein in 1905","action":"inspect","windowId":"main","href":"#frame-main"}} that the idea became to gain traction.

Bohr applied this idea to the energy levels of electrons orbiting a nucleus in Rutherford’s atom, solving one of the most obvious problems with the model. In Rutherford’s model, electrons were proposed to exist orbiting the nucleus analogously to a planet around the Sun. But from classical theories, it was known that a charged particle moving in a curved path will emit radiation. Therefore, these electron orbits should not be stable, they should lose energy as they orbit and spiral inwards towards the nucleus. This was a big problem for the theory.

However, Bohr’s hypothesis of quantisation means there is an energy ground state, which is as low as the electrons can go, avoiding the deathly spiral. This idea ,which was refined iteratively while collaborating with Arnold Sommerfield, combined with {{"replaceWith":"span","articleId":2091489183,"content":"Pauli’s exclusion principle","action":"inspect","windowId":"main","href":"#frame-main"}} to create the picture of atomic structure we have today: a nucleus with electrons stacked in orbitals with increasing energy.

The fallout over the next 50 years was outrageous. This discovery lead to a more complete picture of why the periodic table is organised the way it is. The separation of energy levels allowed us to understand that only specific jumps in energy were allowed, illuminating why each atom has its own ‘fingerprint’ spectrum which we use to identify elements from anywhere between our lab and distant galaxies. The quantisation of energy levels was the beginning of the quantum physics revolution. Knowledge of the atom’s structure lead to the entire field of nuclear physics. The list goes on.

This is a great example of how using a literature map can illuminate the way science makes progress. Any significant discovery is always preordained by other thoughts and papers, and what makes them significant is fallout and consequences of these discoveries. Each of the papers mentioned above can be found in the embedded map, and lead to many more amazing discoveries which you can explore in detail in the recent review articles which are linked to Bohr's paper. Take a look around, and see what there is to see.